What does a robotics expert actually do at Volkswagen?

What does a robotics expert actually do at Volkswagen?

At the Smart Production Lab of Volkswagen experts program software “brains” for robots - so machines can work with people.

For Volkswagen, cooperation between people and machines in production is becoming more and more important. Increasingly, work on a vehicle or component is carried out by people and robots not separately or in sequence but simultaneously and together. This means that robots need to understand what human workers want and need from them. Johannes Teiwes teaches the robots. He works at the Group IT Smart Production Lab and programs software "brains" for robots so that they can provide the best possible support for people.

At the hall 54 of Volkswagen’s Wolfsburg plant, skilled employees are assembling engines, the line is moving with Golf engines going by at regular intervals. The employees are supported by a robot side by side without any protective barriers. This principle is known as human-robot collaboration (HRC).

Robots that work so closely together with people also require considerable knowledge and skills. “More and more sensors are being installed in robots these days,” says Teiwes. “That requires a new type of programming, and poses some challenges for us at IT.”

Teiwes works at the Smart Production Lab of Volkswagen Group IT in Wolfsburg. The robot that Teiwes and his colleagues programmed for the job on the assembly line identifies engines on its own – whether combustion, GTI, TDI, etc. – and performs its task with speed and accuracy. In this case, it’s bolting. Even more importantly, if one of its human colleagues gets too close, it registers that fact and slows down. For safety is the highest priority here. 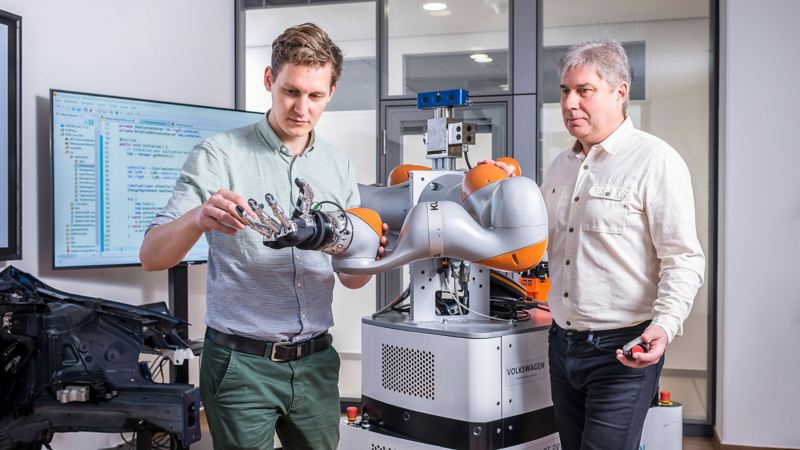 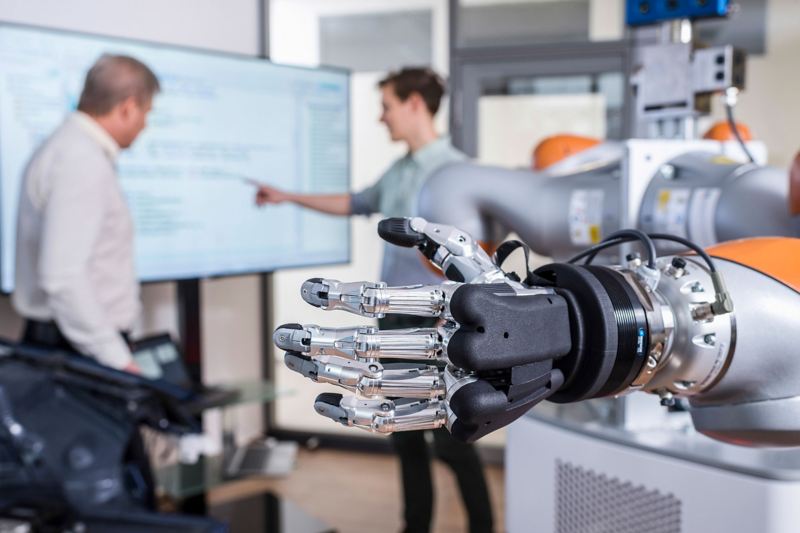 The team at the Smart Production Lab has developed the robot’s functions in such a way that they can be used for additional applications. “The bolting function is one of the skill modules we’ve programmed,” Teiwes explains. This makes a whole range of functions possible, such us handing heavy parts or tools over to people, either independently or on command. Ergonomics play a key role here.

The Smart Production Lab currently has a team of 40 IT experts – primarily computer scientists but also industrial engineers and business specialists. “Our work focuses on smart technologies used in production, always from the perspective of software development,” explains Teiwes. Major topics include the Internet of Things and self-driving vehicles for intralogistics applications.

The team at the Smart Production Lab is already working on its next robot project. Known as MIRCO – which stands for Mobile Intelligent Robotic Co-Worker – it is a two-armed robot prototype on a mobile platform. Of special note here is that its creators are experimenting with human-like gripping technology. This type of robot can grasp heavy components, yet be just as effective at holding a single screw. “We humans are the best model for it,” says Teiwes.

“To program robots you need a good imagination and a lot of patience,” he says. Software developers also have to be good at abstraction. “Programming is a very creative process,” he adds. It can’t hurt that Teiwes enjoys playing the piano in his spare time, and is especially fond of improvising and coming up with new melodies. And instead of just two characters to work with – zero and one – at the piano he has a full scale at his disposal.

Your job in our Volkswagen IT

Would you also like to work at Volkswagen in the IT, digitization and development area or take a look at it with an internship? You can find our job offers here.

More insights into our IT department
Job Portal