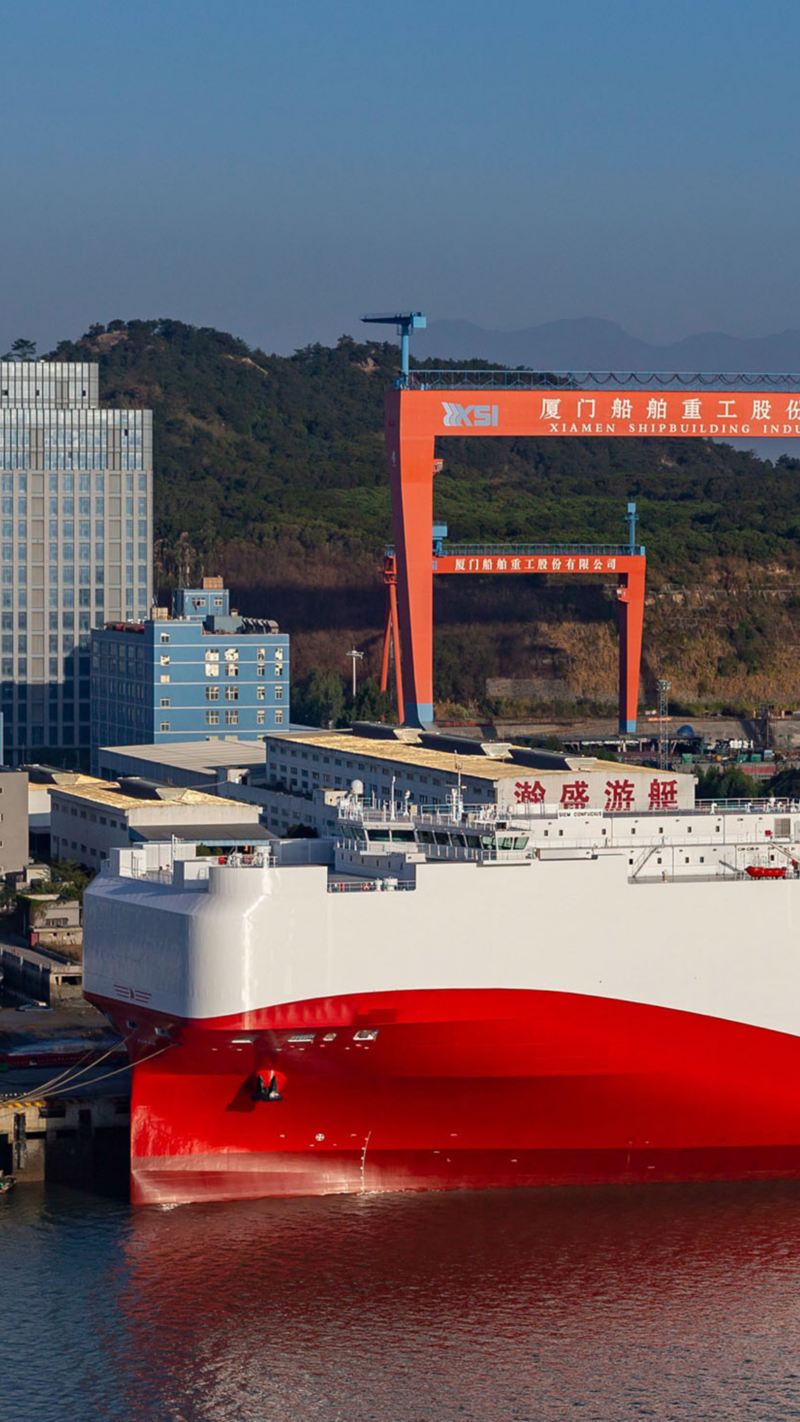 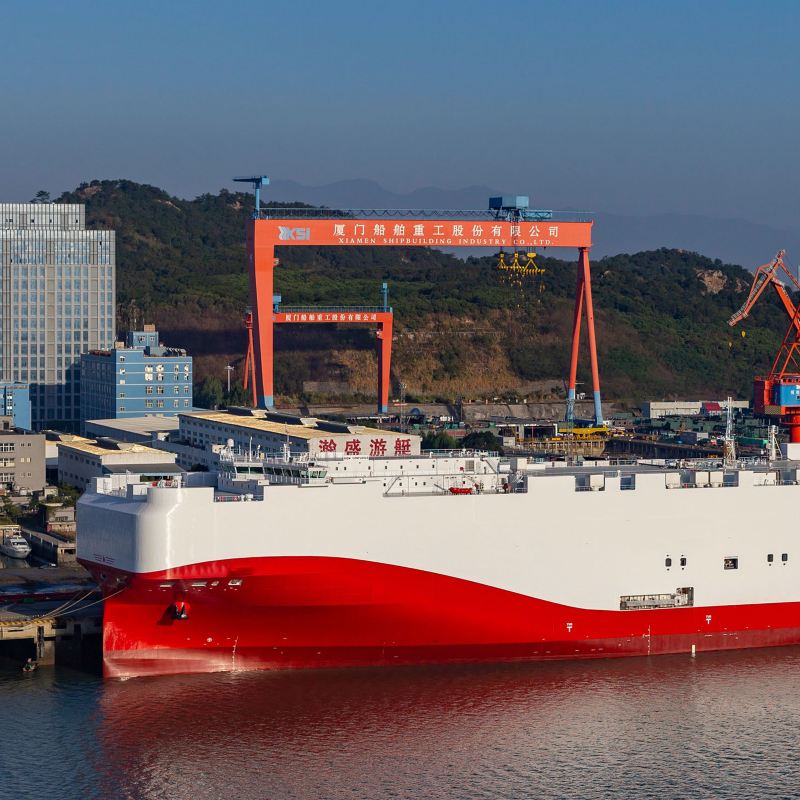 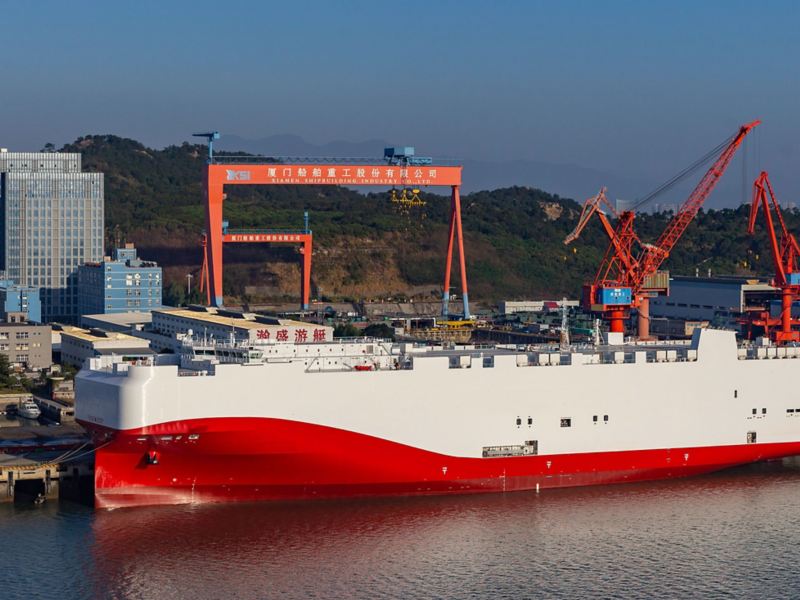 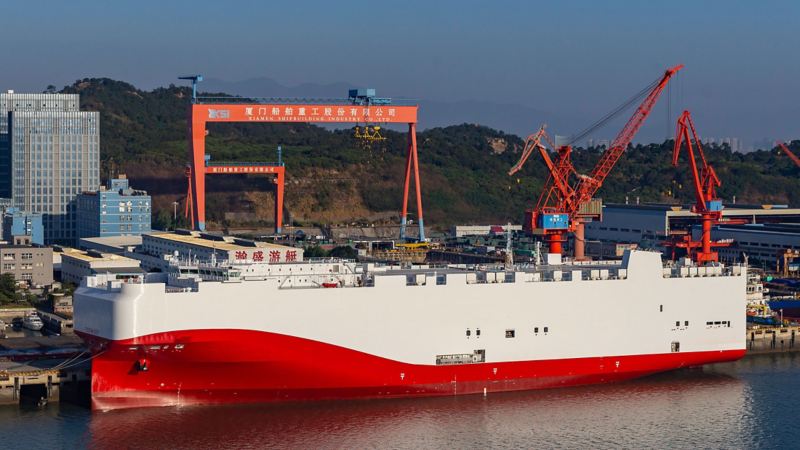 We are proud to put the world's first LNG vehicle transporter of this size into service. This is an important part of our decarbonisation strategy.
Thomas Zernechel
Head of Volkswagen Group Logistics

By 2025, in accordance with the environmental mission statement "goTOzero", the company aims to reduce its total net CO2 emissions by 30 percentand be get CO2-neutral in 2050.All transports - by water, road and rail - must be climate-friendly to achieve this. "We have to take action now, because ships like the LNG freighter SIEM CONFUCIUS and soon its sister ship SIEM ARISTOTLE will be in service for many years," says Zernechel.

Like her sister ship, which is expected to enter service this year, the technologically ultramodern SIEM CONFUCIUS, which is 200 metres long and 38 metres wide, has 13 car decks and a capacity of 7,500 CEU (Car Equivalent Units), which corresponds to around 4,800 vehicles in the Volkswagen Group model mix from passenger cars to light commercial vehicles. The ships are powered by 12,600 kW dual-fuel marine engines with direct injection and exhaust gas after treatment from MAN Energy Solutions. In eco-speed mode they travel at a speed of 16.5 knots (30.6 km/h). The two tanks in each ship, each holding 1,800 cubic metres, are sufficient to cover the entire distance with the fuel stowed in Europe. In addition to liquid, deep-frozen natural gas, the car carriers could also be operated with biogas or E-gas from regenerative sources.

Volkswagen Group Logistics organises, coordinates and is responsible for around 7,700 ship departures worldwide every year. Several hundred liners and eleven car freighter charter ships, two of which are now being replaced by the LNG units, sail the world's oceans for the Group every day. They ship 2.8 million new cars a year.

Most of the charter freighters in service for the Group are deployed on the North American route, as so-called round the clock ships. From Emden, they leave fully loaded for the US East Coast, where the vessels destined for the US market are offloaded. From there, the ship continues on to Mexico, where it is first unloaded and then reloaded. With another stopover in the USA, the ship then returns to Germany. Length of the tour: about 12,000 nautical miles. Duration: 45 to 50 days.

Your browser is outdated!

For the best user experience, please update your browser.